I have closed off a very busy year of travel with my first visit to Israel, which seems hardly possible with so many trips all over the world. That said, the timing of going there now seemed present for me. Like those of you who may have never gone, I was profoundly curious, with so many who have gone there before having shared stories of profound spiritual experiences and insights. After all, it is unique on multiple level historically, poetically, and spiritually. Israel is a global icon of continuity and controversy. Going there primarily on business, what would happen within me? That was the question.

So here are several impressions, accurate or inaccurate as they may be. First, I was impressed with the degree to which I saw the Israeli culture attempt to “make space” for those who, within Jerusalem, were “not committed” to Israel’s current right to exist. Having experienced Southern overt racism, I did not feel that kind of spirit on the streets or with the non-Jewish people I engaged. Strangely enough, the social arrangements did not feel tense or artificial. I know Jerusalem is not the Gaza Strip, but the very fact that their governing body, the Knesset, has dozens of Israelis in it, gave me a whole other impression from what we publicly hear about “implacable” Jews. I am sure injustices exist, but with none of those Jewish leaders I met did I feel the condescending distain I have felt regarding race relations here in the US towards the non-Jews. However, I also encountered no illusions concerning the commitment of the hardline Islamists to the destruction of Israel as a state. Their enemies are simply biding their time and I don’t envy the Jews living with this reality—and it surely is a reality.

Secondly, everything is small and unbelievably dense, historically speaking. Standing on the Mount of Olives, only a mile at most from Jerusalem’s walls, in a panorama of no more than ten miles, one can see more than 4,000 years of history in a single gaze. I have never been more historically stunned in my life. Nowhere else on earth can you see 4,000 years of major multi-cultural events so connected and visible. The God of Abraham, Isaac, and Jacob is clearly into historical density! To history lovers, that panorama is 400 pounds of chocolate cake. Someday, I want to spend a day just looking at it and mentally rehearsing the major events that took place in this tiny little space that rocked the world.

From Abraham to Jesus, and from Jesus to here, is a long way, and here is this tiny little city still giving the nations of the earth heartburn. If that is not enough, Jesus says He isn’t done with it yet! 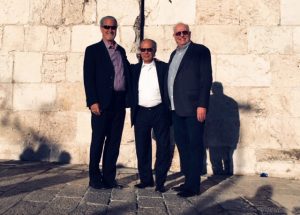 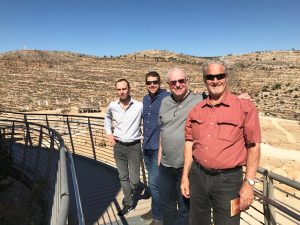 Our tour group at the Holy of Holies in Israel

Yes, I did have some deep spiritual experiences there, two of them I want to share. Most specifically, literally seeing Jerusalem and its historical reality forever changes the way one reads the Bible. The Bible is ideas and concepts without a context. Being in Israel concretizes the Scriptures—how they belong to space that is visible, tangible, and touchable. I wish everyone who loves the Bible could go to Israel and let it make the Scriptures real and not just true. Something inside has changed; truth has a visual context. I didn’t visit Bethlehem, the Sea of Galilee, or a number of other future sites. I did, however, go to Shiloh and stand on the exact spot where the Holy of Holies and the Ark of God occupied for nearly 400 years before King David moved it to Jerusalem nearly 300 thousand years ago. That was a wake-up call.

Anyway, what does all this have to do with December and Christmas and all that kind of warm, fuzzy spiritual stuff? Everything. I just saw the stadium where so much of that game was played, and that is…